Week 3 has been a week full of transformation. We have had the honor of serving 102 youth ages 8-12 from the Quad Cities region this week!! We are very excited to establish a relationship with these 8-12 year old’s as we make a 10 year commitment to the youth that we serve. We look forward to seeing them back year after year to water the seeds planted this week.

As seen in the main image, our youth enjoyed a lunch this week from Chick Fil A on University Ave. in Des Moines! We were the winner of a charity lunch give-away. Our youth greatly enjoyed the treat and it was a relief from the food prep process that our kitchen staff is vigorously doing day in and day out during summer programming. Thanks, Chick Fil A!

The story we are highlighting this week is from the perspective of our Women’s Director, Faithe Norris, previous program graduate and a great leader to our staff and students. Please pray for our staff to have continued guidance and direction as they work with so many youth that need someone to love them.

I get a lot of opportunities to talk to our kids when they are in times of crisis, which is usually when the truth comes out. My go-to strategy is to get them on my golf cart and take them on a little ride to help them calm down and talk to them. The most memorable golf cart ride I had this week was with a boy named Luke. His team leader had told me that he was making concerning comments regarding suicide and inappropriate comments to other Ranchers.

The team leader asked if I could address the comments. With the team leader (Madi) with me, Luke and I took a ride. We found out Luke was in foster care and that he had been in several foster homes. He had been abused and neglected by his birth mother so severely that he had development delays. He had been shuffled around in the foster care system because he has severe anger issues and had been deemed “too much to handle” by many people. While telling us this he was rather emotionless which was a little concerning.

Madi and I kept reassuring him that he wasn’t too much to handle and that he didn’t deserve the bad things that had happened to him. We comforted Luke and told him that we weren’t angry at him for anything but that we needed him to know we understood him and we cared about him too much to ignore what he was telling us. After more conversation ensued, I swear we saw this boy physically change before our eyes! Tears started welling up in his eyes and he told Madi and I that he had tried really hard to control his anger because he was ashamed of who he was and how he had acted.

God gave us the opportunity and the words to speak against shame in Luke’s story. We got to tell him what God says about him and Who He is. We prayed for him before taking him back to his team unit. As the week went on, you could see Luke’s angry, distant shell melt away. By the final assembly meeting, he was laying his head on Madi’s shoulder with tears in his eyes because he didn’t want to leave The Ranch!

The Power of God’s Love

This story is an incredible testament to the power of the love of God.  His love transforms lives and we are grateful that he uses us as puzzle pieces in the lives of the many youth at risk that we come in contact with each day. We can’t wait to see what God has in store for The Ranch in Week 4. We greatly appreciate your continued prayers and hold them close to our hearts. Thank you for being a part of The Ranch family and making a difference!

Below is an image in cross form of the all the children that have attended The Ranch during the first two weeks of summer programming, please pray that God will continue to water and grow the seeds that have been planted in their hearts by the staff at Wildwood Hills Ranch that loves them dearly. 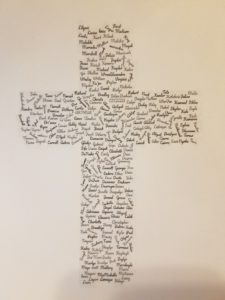