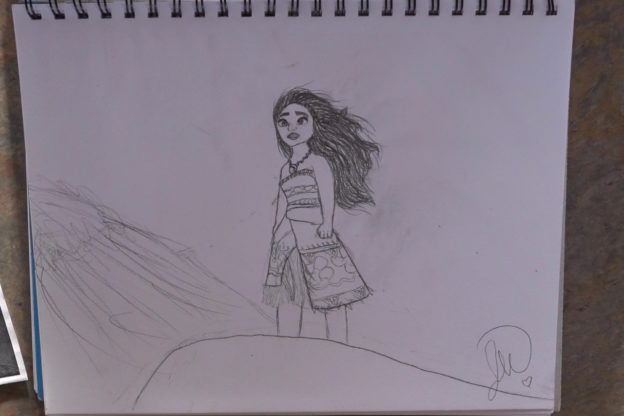 It was her first day at the Ranch and Zoie was done. Longing for home she said, “This place is stupid!” Our staff members suggested a walk first before calling home. Faithe and Kaitlin walked with her to the dining hall and asked lots of questions, getting to know Zoie better. They quickly learned she loved to draw and she talked of drawing almost their whole walk.

When they arrived at the dining hall, she pulled out her sketchbook and became alive and animated as she showed her work. Half way through showing her drawings she said, “I think I’ll stay overnight if I can call my mom in the morning,” and we agreed. But when she got all the way through her sketchbook she decided on her own that she’d stay all week! Our staff invested 20 minutes of one-on-one time to build a relationship and investigate Zoie’s interests and passions and it turned Zoie’s heart.

Faithe asked if Zoie would participate in the talent show later in the week and Zoie immediately refused. “What do I have to offer?” she asked. Faithe suggested Zoie could draw her favorite Moana scene, one of the main characters in our skits this year, and put it to music on video to be shown in the talent show. Zoie lit up and became so excited to participate in a way that would express her gift.

Later that night, Zoie returned to high fives and smiles from her team. And the encouragement and smiling continued throughout the week, culminating in cheers from the audience as they watched Zoie’s video of her sketching Moana, affirming her talent and passion. Zoie cried tears of happiness. Our theme this year is Made On Purpose For A Purpose and Zoie beautifully set an example our first week of programming of what it looks like to live out your calling and purpose.